When shopping for a new car, many people put luxury brands like Audi at the top of their list. It’s easy to see why; Audi is known for its sleek design, powerful performance, and advanced features. But what are some of the other benefits of owning an Audi? For starters, Audi vehicles are built to last. They’re constructed with high-quality materials and undergo rigorous testing to ensure they can stand up to real-world conditions.

Despite all that testing, it is still possible that your Audi will experience problems in the future, especially common problems caused by wear and tear like an oil leak.

The Importance of Engine Oil to Your Audi

Engine oil is one of the most important fluids in your vehicle. It helps to lubricate engine parts, prevent corrosion, and remove heat. Without engine oil, your engine would quickly overheat and fail. That’s why it’s important to check your engine oil level regularly and top it off if necessary. It’s also important to choose the right engine oil for your vehicle. The type of oil you need depends on the make and model of your vehicle, as well as the climate you live in. It can even be affected by the type of driving you do, which is why it is important to have a good relationship with a mechanic you trust.

If you suspect that your engine has an oil leak, it is important to have it checked by a qualified mechanic as soon as possible. Oil leaks can lead to serious engine damage if left unrepaired.

Car engine oil leaks are one of the most common types of mechanical issues that drivers face. An oil leak can cause serious engine damage, and it can also lead to a loss of power and efficiency. In some cases, oil leaks can even cause fires. Failure to fix an oil leak in a timely manner can thus be extremely dangerous. For this reason, it is important to be vigilant about checking for leaks and to take your car to a mechanic as soon as you notice any signs of a problem. By taking care of your car, you can help to avoid the dangers associated with an engine oil leak.

Like many car issues, oil leaks can often be caught early or even prevented altogether by following a routine maintenance schedule. You should check your oil levels regularly between oil changes, and make sure to follow your mechanic’s recommended schedule for routine oil changes. You can also make sure you stay on top of all your other routine maintenance, as that can help prevent your engine from overheating which can cause oil leaks.

If you suspect your Audi has a valve cover oil leak, 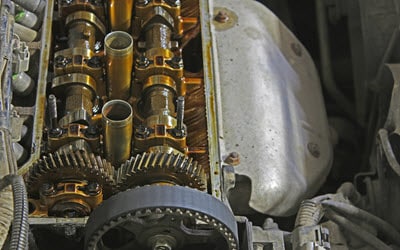 bring it to the experts at Turning Wrenches. Conveniently located in Louisville, KY, we are dedicated to customer service and employ the most skilled service technicians in the area. Call or stop by today to learn more about how we can help with your Audi.