Reasons Behind Crankshaft Position Sensor Failure in a Mercedes

The crankshaft position sensor is an important measurement tool that is essential in all modern combustion engines, including your Mercedes. It is needed to monitor the speed of rotation and the position of the crankshaft. It sends the information it collects to the Electronic Control Unit (ECU) which is the main computer onboard your Mercedes.

The crankshaft position sensor rarely fails without warning. There are usually some signs and symptoms that occur which can make you suspicious. Let’s learn more about this important sensor, why it fails, and how you can tell if failure has occurred.

How the Crankshaft Position Sensor Works

Located next to the flywheel ring gear, the crankshaft sensor can come in 2 different variants. Your Mercedes will either use an inductive sensor or a hall generator. These two forms work by altering magnetic fields using the ring gears rotational movement. The magnetic field which is created is used to form a range of voltage signals which are then picked up and used by the ECU.

As the crankshaft position sensor is an electronic component, the reasons why it fails largely follows the same reasons as the other electronic systems of your Mercedes:

There are 3 key signs which can indicate imminent failure of the crankshaft position sensor. Remember, without a working sensor, your Mercedes is unlikely to go anywhere at all, so watch for the early warning signs below.

As the crankshaft position sensor helps regulate the timing of your Mercedes’ engine, when it starts to fail, you will likely notice starting your car successfully first time around starts to become a rarity. Without the data provided by the crankshaft position sensor, your ECU is left guessing. This can create a chain reaction that has all your engine systems running out of sync with one another, which will cause a false start. As the problem progresses, your vehicle may reach a point where it is simply unable to start.

If your Mercedes stalls intermittently, then the crankshaft position sensor may be on the fritz. This is commonly caused by issues with the sensor’s external wiring and not with the sensor module itself. When the wiring is damaged, the connection between the sensor and the ECU becomes spotty, despite the sensor working perfectly. This will result in your Mercedes performing normally and then suddenly and intermittently stalling when the connection between the two parts is lost. This issue should be resolved as soon as possible because any rogue element that makes your vehicle unpredictable is an accident waiting to happen.

The check engine light, otherwise known as the Engine Management Light or EML, can be triggered by the ECU whenever an issue with the engine is detected. This can range from low-level issues such as a loose gas cap to more severe problems, such as catalytic converter failure. As a failing crankshaft position sensor throws the engine’s timing into dysregulation, it can cause the ECU to trigger the engine management light. This will then send out a relevant error code which can be diagnosed by a professional mechanic. This light is meant to safeguard the health of your engine and should never be ignored.

At Turning Wrenches of Louisville, KY, we are 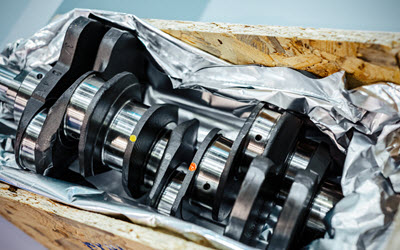 passionate about auto repairs and servicing. We have a hardworking team of mechanics who will work diligently to fix the problem with your Mercedes, be it the crankshaft position sensor failure, or other unrelated problems. So, for trustworthy repairs and great customer service, look no further than Turning Wrenches. Our dedicated customer service team is ready and waiting to take your call.